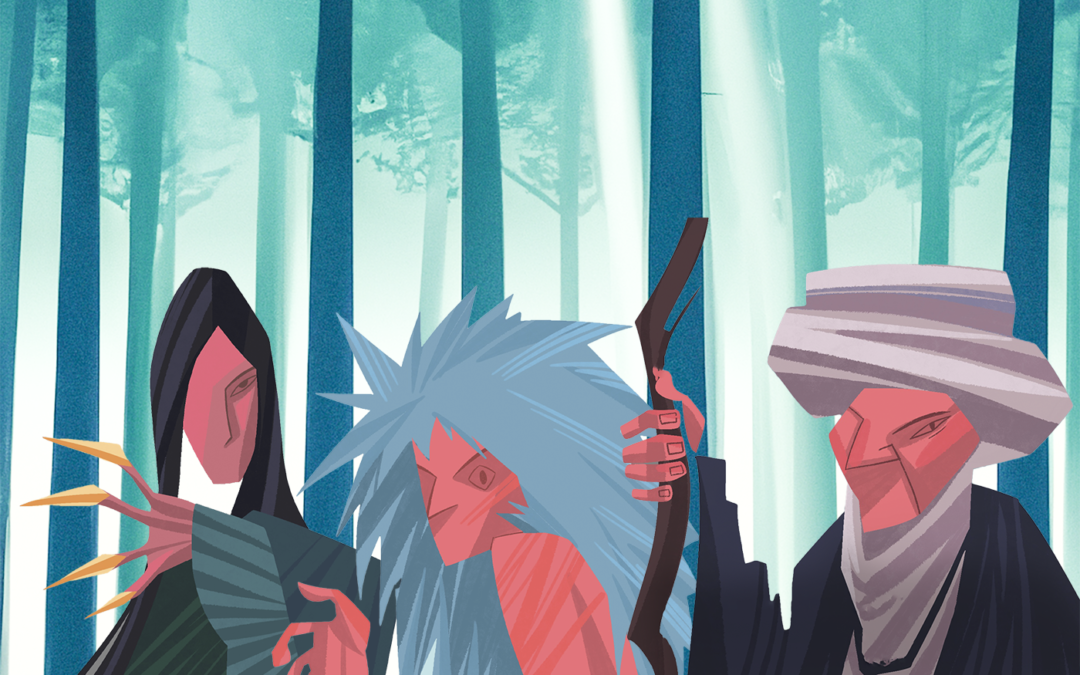 Zhanar Sekerbayeva shows that the perceptions of gender roles in the Kazakh society represented in fairy tales and legends are not at all straightforward.
11 November 2022
By Zhanar Sekerbayeva
Illustrations by Aigerim Sattar
The background images for the illustrations were generated by AI and extensively edited afterwards

As someone who questioned and accepted myself as a lesbian in my teens, I was a lonely child. I could not find fairy tales or legends in Kazakh literature that reflected my quest and showed the image of a strong and daring girl. All I came across were batyrs (Kazakh horsemen warriors – ed.), tricksters, khans, magical animals, and viziers. I can hardly recall any female characters, though I read a lot. I won’t even talk about classic Russian literature, because reading it did not make me feel better.

The world literature, which I read as part of the school curriculum, also did not stand out very much: there were very few stories with female leads. I came across queer fairy tales much later, but I am not disappointed at all. I often share these discoveries with my acquaintances and friends. I use the stories as examples when talking to people who attack the LGBTIQ+ community.

After all, according to opponents of gender diversity, Kazakhs had no practices other than heteronormative, heterosexual ones. However, as I found out, that was not like that.

Let me tell you this in order.

Famous Zhalmauyz Kempir, Zheztyrnak and Albasty appear in many Turkic myths and legends. They are the beings of the lower world who bring death, failure, and misfortune. Their resistance to the established order (attacking batyrs, eating human meat, sucking the blood of girls, living away from people) is presented as a negative thing. Asima Ishanova, Ph.D. in Philology, professor at L.N. Gumilyov Eurasian National University, commented on the image of Zhalmauyz:

“I think the monstrous female characters of Kazakh folklore are rather ambivalent, ambiguous. This ambivalence is felt in Kazakh mythology and folklore, as well as in world culture. The archetype of the Great Mother, woman (Baba Yaga, Kali) – they are destroyers and liberators, bloodthirsty and wise, kind and cruel at the same time.” 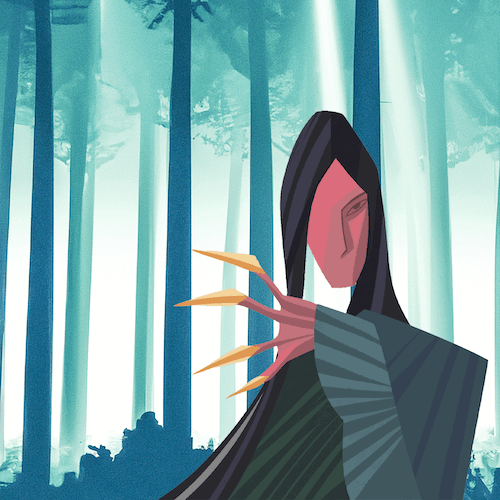 Zheztyrnak is a female daemon with brass claws. She is voracious, has a shrill voice and is extremely physically strong. She can also transform into an animal or take on the form of any girl. This creature often does not indicate its gender, so the traveller tries to recognise it by its clothing and appearance, and the guess is not always correct.

Zheztyrnak sneaks up and attacks a log or a stick (more precisely, she jumps and hugs it), which the hunter leaves in his stead. This episode has sexual connotations – the hunter is worried about his bodily boundaries being violated by a man. If Zheztyrnak appears in a female form, the hunter is easily tempted and enters into a sexual relationship with the creature (even if his wife is waiting for him in the village).

Russian-language literature from the Soviet period notes that Zhalmauyz or Zheztyrnak are similar to Baba Yaga, the demonic heroine of Slavic folklore. This is a very superficial and colonial comparison. Zhalmauyz Kempir holds traces of shamanism. She is the mistress of the family hearth and the guardian of the “death land”.

But what distinguishes the demonic woman from all other female characters? In almost all fairy tales, she gives fire back to a girl who had it negligently extinguished. The girl pays by letting Zhalmauyz suck blood from a toe or knee. This action can be interpreted as an intimate sexual act.

In cultural studies, the vampire bite/kiss is interpreted as a metaphor for sexual interaction. Zhalmauyz does not offer male protagonists or secondary male characters such an exchange – blood for light to restore fire. 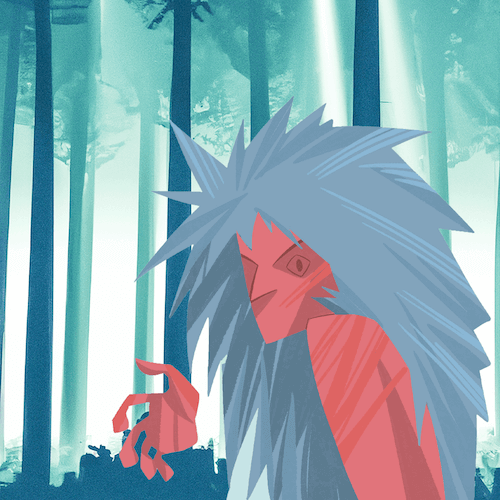 Albasty lives near water bodies. She can be seen holding a comb, a book and a coin. At times, Albasty would have enormous breasts which she would swing on her shoulders. Breasts are not just a sign of Albasty’s gender. She can cast a spell on men with her own decanted breast milk. In one tale, Albasty alights on the nose or at the foot of the music performer and interrupts him, all while wearing no pants. She violates the idea of the norm both by dominating male hunters or expressing an active sexual interest and being free to change gender. In front of men, she is a woman and in front of women, she is a man.

These examples show that fairy tales contain illustrations of irregular gender roles and perceptions of Kazakh society. It was not all so straightforward.

Fairy tales provide room for imagination and freedom for practices that break taboos, demonstrating sexuality, new meanings and a rejection of the conventional.

Thus, rather than being a tale of monsters and demonic women, this one is about great foremothers who gave power and potential to other heroes and heroines of legends and tales.

Women at war. Problems of Ukrainian women fighters in the times of full-scale invasion

By Yuliana Skibitska
How the state's policy towards women in the armed forces has changed over the 30 years of Ukraine's independence, what challenges women have faced since the full-scale invasion, and... 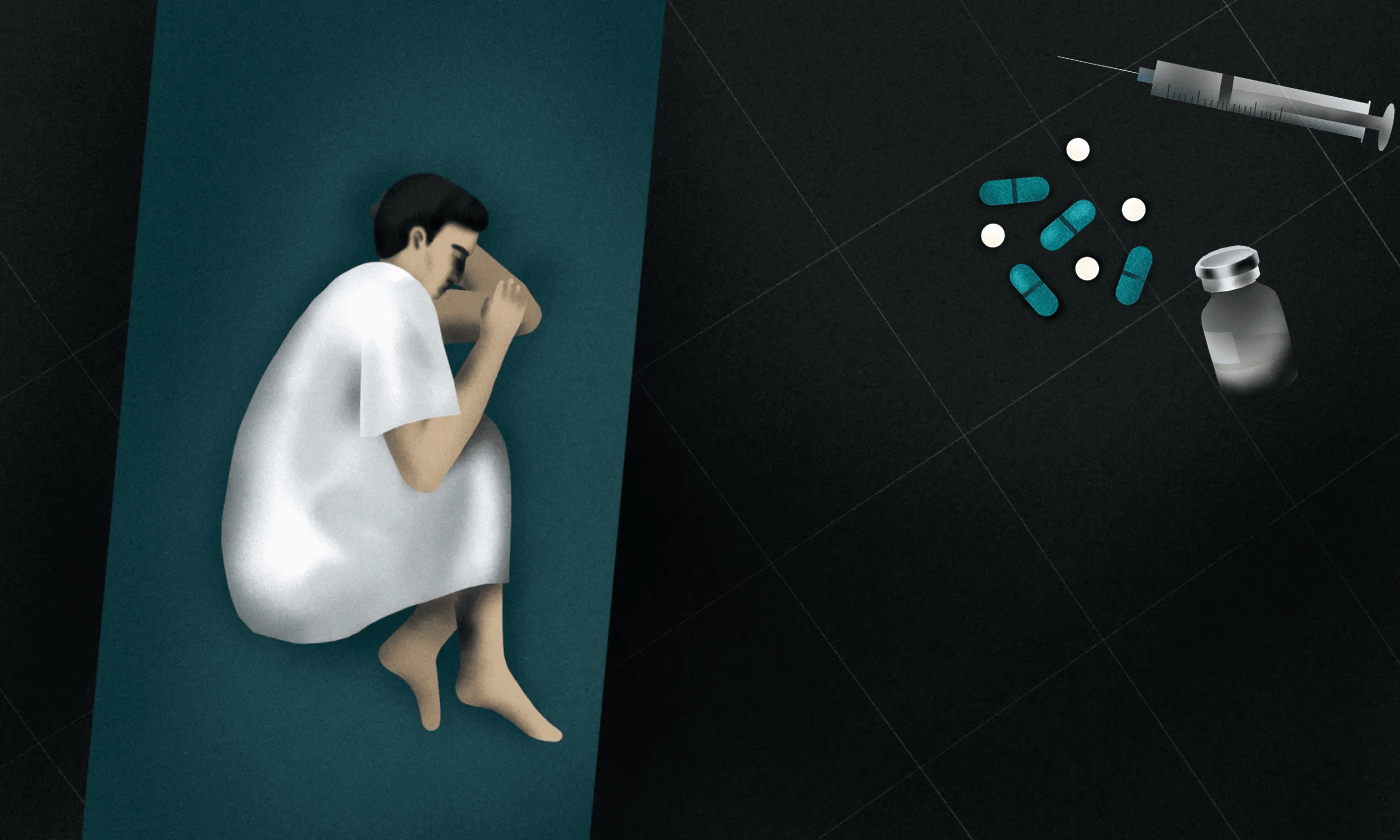 Code 103. How prosecution under Article 120 in Uzbekistan really works

By Sarpa Media
How blackmail, extortion, and ill-treatment are part of “sodomy” investigations, and why consensual sex is still criminalised in Uzbekistan, a country that announced 2022 the year of “human interest”. ... 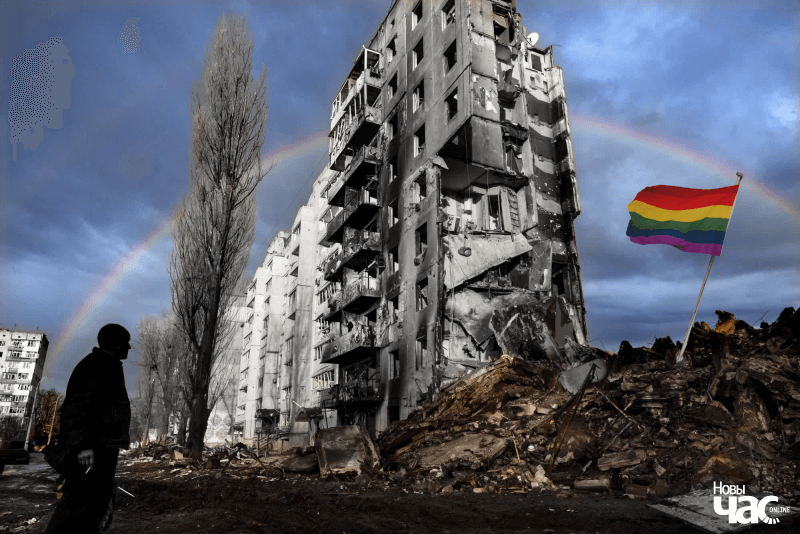 Coming out during war: Doubled unsafety

By Mara Vavilonskaya
Two stories of people who, among other things, have to defend their rights, and whose feeling of unsafety has doubled...